What can CEOs teach boardrooms about corporate culture?

CEOs and former CEOs are a dominant force on the boards of major companies. They are also the most sought-after candidates when boards search for new directors. How do these company leaders, so accustomed to being the principal decision-makers in their companies, adapt to the more limited strategic oversight and advisory role that boards play? In our last episode of season six on the Principled Podcast, host David Greenberg explores the lessons that CEOs and former CEOs can bring to boards about purpose, culture, and values. Listen in to his conversation with Walt Rakowich, the former CEO of global real estate organization Prologis and current board director and audit committee chair for organizations including Host Hotels and Resorts, Ventas, and Iron Mountain, Inc.

Walter C. Rakowich is the former CEO of Prologis, a leading provider of distribution facilities and services with over $50 billion in assets and operations in the Americas, Europe and Asia. He joined Prologis in 1994 and was the Senior Vice President/Director of the company’s Mid-Atlantic region where he was responsible for expanding the reach of Prologis to the leading logistics markets in the Midwest and Atlantic states. From December 1998 to January 2005, he served as Managing Director and Chief Financial Officer and served as the President and Chief Operating Officer from January 2005 through November 2008.

Walt earned his MBA from Harvard Business School and his BS, with distinction, in Accounting from The Pennsylvania State University. 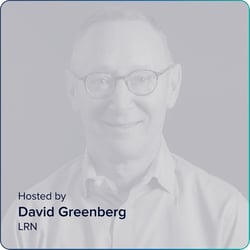 David Greenberg serves as Chair of the Governance and Risk Assessment Committee and a member of the Audit Committee of International Seaways (NYSE: INSW), one of the largest global crude oil and petroleum tanker companies.  Mr. Greenberg’s previous board experience (2006 to 2016) was as the independent director – and member of both the Audit and Compensation Committees --of APCO Worldwide, a private communications and government affairs consultancy and as a director (2013 to 2016) of Clean Tech Group, which creates opportunities for industrial companies to invest in innovative, clean technology.  He also served for 5 years as Chairman of the Board of Trustees of The Keystone Center, a Colorado non-profit that brings together oil, chemical and pharmaceutical companies with leading NGOs to find solutions to complex public policy challenges at the federal and state levels.

Greenberg is currently Managing Director of Cortina Partners LLC, a private equity firm that owns companies in the air medical, addiction treatment, bedding, textile and outdoor recreation industries and is CEO of Acqua Recovery, a residential drug and alcohol addiction center.  He also advises boards and executive teams on strategy, compliance, leadership and culture as a Special Advisor for LRN Corporation, and from 2008 through the end of 2016 was a member of LRN’s Executive Committee. For 20 years prior to 2008, Mr. Greenberg served in various senior positions overseeing government affairs, corporate affairs, communications and strategy at Altria Group, Inc. – then the parent company of Philip Morris USA, Philip Morris International, Kraft Foods and Miller Brewing – culminating in his role as Senior Vice President, Chief Compliance Officer and a member of the Executive Committee.  As one of five senior vice presidents of the corporation, he served on the Management Committee, which oversaw all strategy and company operations.  He was also a principal architect of the company’s very successful efforts to end the ‘tobacco wars’ which threatened the company’s very existence.  Earlier in his career, Mr. Greenberg was a partner in the Washington D.C. law firm of Arnold & Porter and also served as Legislative Director and General Counsel of the Consumer Federation of America.  He attended Williams College and has JD/MBA degrees from the University of Chicago.

Greenberg has testified before the U.S. Congress, the European Union, the Israeli Knesset and other governmental bodies over two dozen times and has appeared on ABC Nightline, the CBS Morning News, BBC Morning, and the PBS News Hour, and has spoken at leading events for CEOs and boards.

Find this episode of Principled on Apple Podcasts, Google Podcasts, Stitcher, SoundCloud, Podyssey, or anywhere you listen to podcasts.